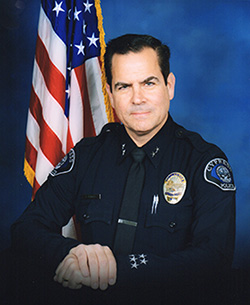 Commander Steven Ramsey began his career with the Cypress Police Department in 1988 as a Police Officer. In 1997, he advanced to the position of Corporal and was promoted to Police Sergeant in 2000. Commander Ramsey promoted to Police Lieutenant on November 11, 2011 and became a Commander on May 20, 2013.

Commander Ramsey has attained his Basic, Intermediate, Advanced, Supervisory, and Management P.O.S.T. certificates. He possesses a Bachelor of Science degree from California State University, Long Beach, and completed the Sherman Block Supervisory Leadership Institute course, Class 211, and the P.O.S.T. Management Course. He was awarded the 2002 Officer of the Year by the Cypress Police Officers' Association.

Commander Ramsey was instrumental in reconfiguring the Department's patrol beat configuration and team patrol schedule, and has previously served as a Patrol Officer, Field Training Officer (FTO), Motor Officer, Detective Sergeant, Motor Sergeant, and Patrol Watch Commander. Additionally, he previously served as the Administration Division Commander and most recently served as the Operations Division Commander, overseeing all uniform operations to include patrol, traffic, K9’s, and the jail before assuming command of the Criminal Investigations Division.