What do they do?

After a report is taken in the field by one of our patrol officers, it is forwarded to the Criminal Investigations Bureau for further investigation. Detectives follow-up on any possible leads, interview victims, witnesses and suspects (if any), and build a case against those individuals who would commit crimes in our community. After a case is built, Detectives will forward the case to the Orange County District Attorney’s office to obtain a criminal filing, and then work hand in hand with the courts for a successful prosecution. As you can imagine, countless hours are spent investigating these crimes which include Homicide, Kidnapping, Rape, Assault, Crimes against Children, Domestic Violence, Forgery, Fraud, Auto Theft, Burglary and Identity Theft.

If you have any information that will help the Cypress Police Detectives solve a crime, please call (714) 229-6631, or check the Criminal Investigations Bureau directory for a specific detective’s desk.

These are often the most notorious cases, which include investigations into homicides, robbery, felony assault (handguns, knives and other instruments), rape, hate crimes and missing adults. The detectives handling these crimes also coordinate efforts for successful prosecution against the suspects in court. By maintaining a close working relationship with the District Attorney's Office, the detectives begin preparing the more serious cases for court from the outset.

The detectives assigned to investigate property crimes handle the highest volume of individual cases; residential and vehicle burglary, automobile (and boat) theft, and all other thefts. In addition to locating and arresting offenders, these detectives pride themselves on their efforts at recovering stolen property for return to their owners.

The decision to initiate prosecution proceedings against a juvenile offender is more complex than that of an adult. The detective handling juvenile offenses has a variety of options available as to the final disposition of the case. Many times, especially for repeat offenders and crimes involving violence, the juvenile court system is most appropriate. Other options include a system of organized counseling requiring parental involvement, restitution and mandatory workshops on "Youth, Family and Law" as well as a work service program.

The investigation into reports of domestic violence have become more complicated in recent years as successful prosecution against these types of abusers has increased. Every report of domestic violence receives a follow-up contact and interview. The aggressors in these cases are arrested and prosecuted whenever possible in an effort to stop the "cycle of abuse." These detectives work closely with the Department of Social Services. These individuals pay particular attention to the welfare of children in the homes where domestic violence is occurring. 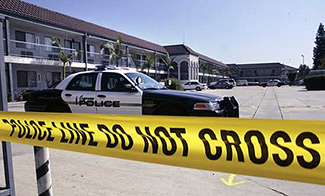 The Forensic Crime Scene Unit is responsible for processing crime scenes in the field and evidence brought to the Cypress Police Department. Evidence collection of latent fingerprints, DNA, trace evidence such as hair and fiber, photography, gunshot residue testing, presumptive narcotic identification tests, investigation of altered and forged documents, and chemical processing of evidence is handled by the unit.

The in-house photo lab is a fully-functional photo lab that requires no support from outside sources and uses the up-to-date digital photography equipment, including infrared photography. The lab also uses a Digital Image Management System to store thousands of evidence photographs for future development when needed. Specialized software is also used to enhance surveillance video recorded from crime scenes and aid in identifying suspects. 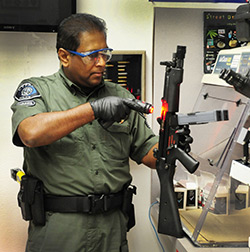 The processing section of the lab is where evidence recovered from a crime scene is analyzed. Chemical processing, dusting for latent prints, and extracting hair and fiber from clothing are handled in the lab using alternate light sources, fuming chambers, and a high-powered microscope.

With DNA playing a key role in solving crimes, evidence is processed at the crime scene or brought into the lab. The swabs are then sent to the Orange County Crime Lab for analysis. 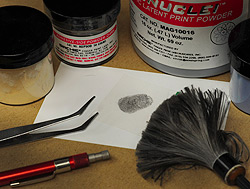 Preliminary investigations for gun shot residue and the detection of latent fingerprints and trace evidence on weapons are conducted in the lab. Periodic testing of evidence involving firearms and training of personnel in firearms evidence collection is conducted in the department’s firing range.

In today’s world of crime scene investigation, the Forensic Crime Scene Unit plays a key role in supporting the Patrol Division and the Criminal Investigations Bureau to help solve crimes.

If you should have any questions or would like more information about the Forensic Crime Scene Unit, please contact Ravi Perera at 714-229-6607.

Free viewers are required for some of the attached documents.
They can be downloaded by clicking on the icons below.