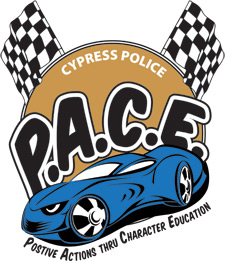 The Positive Actions thru Character Education (P.A.C.E.) program was created and designed to enhance awareness, influence choices, and educate grade six students in the areas of Internet safety, social media, peer pressure, bullying, violence, and drug abuse. The ten-week character-based program is taught to all grade six students from the Cypress School District, as well as two schools from the Savanna School District and two private schools (totaling approximately 900 students) using components of the Josephson Institute of Ethics' "Character Counts!" ®

The emphasis of the P.A.C.E. program is to guide students to become persons of good character and behavior while concurrently forging a positive relationship with the Police Department. While students learn to make virtuous and responsible decisions they will be instructed to recognize and resist the many direct and subtle pressures that may influence them to experiment with drugs, bully others, and/or commit other acts of violence which are deemed as socially unacceptable. 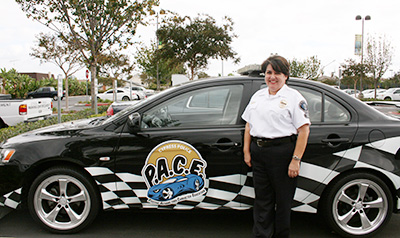 The program content of P.A.C.E. is organized into ten 45-minute lessons. The program offers a variety of interactive, group participation and cooperative-learning activities which are designed to encourage students to interact with the instructor and to make good decisions to solve problems of major importance in their lives. Participation in the P.A.C.E. program culminates with an assembly to recognize the students for their commitment to be a person of good character.

The PACE program is taught by a the department’s civilian Community Outreach Officer. 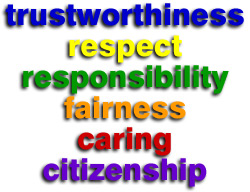 The Six Pillars of Character are the foundation for showing good character from the time a student rides a school bus, to learning in a classroom, eating lunch, and interacting with others. Six Pillars of Character will eventually become part of the language among city employees, students, teachers, and the community. The CHARACTER COUNTS! framework will not only be visible through displays, such as banners and posters, but more importantly, it will be evident in how students and the community respectfully treat each other every day.

Josephson Institute CHARACTER COUNTS! is a nationwide character education program administered by Josephson Institute and the Center for Youth Ethics. Michael Josephson, founder and president of the nonprofit Josephson Institute, has presented to government officials, business leaders, educators, and professionals in sports, and other business and military sectors. Mr. Josephson has a radio program and serves as commentator on character and ethics. At the high schools, the Josephson Institute’s program for sportsmanship, Victory with Honor, is utilized by coaches and teammates. Students involved in sports are very mindful of the Six Pillars of Character during team practices and games. Their coaches instill its importance in everything they do. For learning in the classroom, the honor above all, addresses academic honesty. Students focus on trustworthiness and fairness as guiding pillars in their academic learning.

With hurried lifestyles of today’s families, youth can be influenced less by their families and more by media and individuals outside the home.

It is our responsibility as citizens of this community to surround young people with positive images and values. If we don’t like the choices youth are making, we need to look at the choices they are being shown.

Character is developed through examples and practice. Youth need consistent reinforcement of good character from the community. They need to see and hear positive values at home, at school, and throughout the community.

The Goal of CHARACTER COUNTS! in Cypress:

To provide leadership and coordination for the development of citizens who model, and encourage positive character in their homes, schools, businesses, recreational facilities, service organizations, religious organizations, and the community.

CHARACTER COUNTS! is a character development framework based on shared beliefs and consensus values concerning qualities and traits associated with good character. These values transcend cultural, socio-economic, and religious differences. Character education is all about a way of life for children and adults. Children may not always listen to what we say, but they will believe what we do. This is precisely why a community that recognizes and promotes the Six Pillars of Character makes a great place to live, work, and learn.

The Cypress Police Department encourages everyone to adopt, teach and utilize the Six Pillars of Character. This work will create a community where all citizens personally and collectively embrace the principle that CHARACTER COUNTS!

Children Are Our Future…

How Can You Be Involved?

The Cypress Police Department is in the conceptualization phase of the CHARACTER COUNTS! program and is moving towards implementing the program throughout the Cypress community in the very near future.

Once implemented, CHARACTER COUNTS! will provide community leadership for the development of character education to schools, churches, businesses, athletic leagues and other community groups. We will strive to create an increased awareness about the importance of good character and basic values in our society. The program will by no means be just for children. It will be provided through out the city and involve all members of the community, from the police employees to city employees, to the school district and business community. Anyone is welcome to participate in CHARACTER COUNTS!

Extending CHARACTER COUNTS! into the community is a goal of the Cypress Police Department. Community support is an asset in carrying the message throughout our city.

Be honest • Don’t deceive, cheat or steal • Be reliable — do what you say you’ll do • Have the courage to do the right thing • Build a good reputation • Be loyal — stand by your family, friends and country

Treat others with respect; follow the Golden Rule • Be tolerant of differences • Use good manners, not bad language • Be considerate of the feelings of others • Don’t threaten, hit or hurt anyone • Deal peacefully with anger, insults and disagreements Responsibility

Do what you are supposed to do • Persevere: keep on trying! • Always do your best • Use self-control • Be self-disciplined • Think before you act — consider the consequences • Be accountable for your choices

Do your share to make your school and community better • Cooperate • Get involved in community affairs • Stay informed; vote • Be a good neighbor • Obey laws and rules • Respect authority • Protect the environment

Below are helpful tips for parents to help children learn to be trustworthy, respectful, responsible, fair, caring, and a good citizen from Parents, Kids and Character: 21 Strategies to Help Your Children Develop Character, by Dr. Helen R. LeGette:

If you have any questions, please feel free to contact us at (714)229-6626 or visit the CHARACTER COUNTS! website at www.CharacterCounts.org The definition of the Six Pillars of Character are used with the permission of the Josephson Institute.