On September 21, 1978, at approximately 11:00 p.m., Sergeant Ronald A. Dickson noted a suspect vehicle exiting a closed business in a commercial area at a late and unusual hour. Sergeant Dickson made an attempt to stop the suspects and vehicle to determine their identity and nature of their business in the area. Upon attempting to stop the vehicle, the suspect vehicle with two occupants fled from the police unit, and a high speed pursuit followed. The pursuit continued for a distance of approximately two and one-half (2 1/2) miles at speeds in excess of one hundred miles per hour. The pursuit terminated in Anaheim when the suspect vehicle was involved in a major traffic collision wherein the suspect’s vehicle exploded into flames trapping one of the suspects in the wrecked vehicle. The other suspect was thrown from the vehicle and later expired. 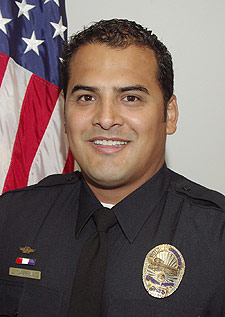 On December 15, 2005, members of the West County Special Weapons and Tactics team responded to a residence in the 6800 block of Wee Way, Westminster regarding an armed suspect barricaded in his residence. Present at the scene was Officer Carrillo, who was assigned to the entry element of the team, and was serving as an assistant team leader.

The S.W.A.T. team response resulted from a stand-off between an armed and violent suspect and the Westminster police that had lasted for approximately twenty (20) hours. During this time, the suspect had threatened to kill himself and members of his own family, and included the suspect firing rounds inside his residence while refusing to cooperate with police. S.W.A.T. team negotiators had attempted to coax the suspect out of his residence through negotiations to no avail. Given the length of this ordeal, and with resources becoming taxed facing an un-cooperative and armed adversary, tear gas was deployed in an effort to force the suspect from the residence. An additional three (3) hours passed after the deployment of tear gas with no surrender, contact or visual sighting of the suspect. The entry team was requested to breach the residence windows, that is to say break out the windows and literally look inside, to visually determine the status of the suspect. When Officer Carrillo had breeched the window of the very last bedroom , the armed suspect, who had been hiding under a piece of carpet on the floor of the room, ambushed Officer Carrillo by suddenly coming out from under the rug, shooting as he came.

The suspect fired several rounds at Officer Carrillo from a TEC-9 pistol at point blank range, narrowly missing Officer Carrillo. Officer Carrillo calmly stood his ground, not yielding to this life threatening risk, and immediately returned fire at the suspect in order to protect himself and other team members. During the gunfire, the suspect was struck multiple times, eventually succumbing to his wounds.

Officer Carrillo’s actions during a confrontation with an armed and violent offender, very likely could have resulted in injury or death to Officer Carrillo or several of the other officers present. His quick and decisive action, taken under intense weapons fire, was conspicuously heroic and in keeping with the finest traditions of the Cypress Police Department.

It is for these reasons that Officer Johnny Carrillo is awarded the Department’s Medal of Valor.