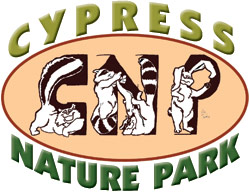 Additional information on what you might see in the Cypress Nature Park.

The flood control basin can collect many thousands of gallons of water. It collects both rainfall and water run-off from the mountains and the streets. Every few years the basin is flooded to maximum capacity. In these years of heavy rainfall, if the basin were not here the entire southwest portion of the city would be flooded.

The pumphouse can pump up to 35,000 gallons of water per minute! The water from the basin is pumped into the Carbon Creek Channel. It's eventual destination is the Long Beach Harbor so it is very important that the water remain as clean as possible.

WHO BUILT THE NATURE PARK?

Cypress Nature Park was planted and built by many members of the Cypress community. For example, The Woman's Club of Cypress and the Junior Woman's Club of Cypress donated many of the tree specimens that are in the park. Boy Scout troops help clear the trails, provide tree identification markers and build stairs in the park. This spirit of volunteerism helps maintain the Nature Park and allows for many activities that occur within it. 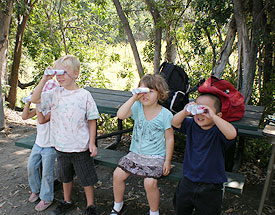 WHEN IS THE NATURE PARK OPEN?

Cypress Recreation and Community Services is now taking reservations for tours and educational programs at the Nature Park for school, church, and day care groups of all ages. Come explore the Nature Park and learn about the wildlife and the vegetation of Cypress. Also learn about protecting nature and the environment with fun activities.

The cost to take a tour is $1.00 per person (children and adults) and there must be a minimum of 10 participants to make a reservation. The Nature Park is located on Ball and Via Largo at 4201 Ball Road. The entrance is on Via Largo.

Free viewers are required for some of the attached documents.
They can be downloaded by clicking on the icons below.